A Project in 2 Parts

Now, what do I mean about a project in 2 parts....well, I received a piece of 8x8 chipboard in my DT pack and it ended up with me making a bit of a mess of it.......not just once but twice!

Anyhow, I started off by giving the chipboard an even coat of Claudine Hellmuth Black Gesso (love this stuff, you don't need much to give a good covering), then I added various Distress Paints and then various Tim Holtz Stamps - I added a few rub ons and then promptly hated what I done.
Here are a few photo's so you can see what I did...... 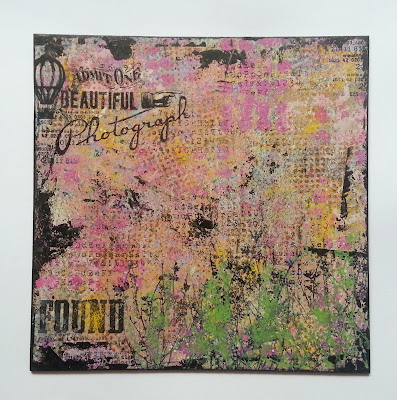 I tried adding some photo's to see if it would miraculously make it better lol Obviously, it didn't! 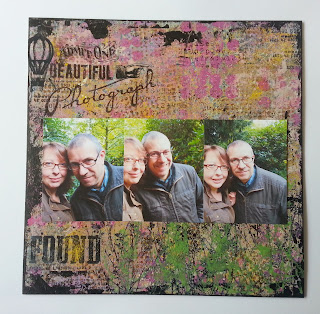 Right, so the second part starts with me taking the Claudine Hellmuth Black Gesso and covering up everything I did.....one even coat of the gesso was all I needed, told you it was good stuff.
I then took the 6x6 Donna Downey Floral Art Stencil and rubbed/dabbed some Picked Raspberry Distress Paint through. Before the paint completely dried, I took my finger tip and rubbed over the paint gently to give a slightly smudged effect. I then took some Lettuce paint by Ranger and rubbed a bit through the stencil over the top of the Picked Raspberry. I also rubbed both of the paints through some sequin waste.
One of the surprising things was, that the rub on word "Found", that I did the first time round was raised and you could still see it, I decided to incorporate it in to this by taking a bit of paint on my fingers and rubbing it over the top.
I stamped the Stampotique Original image called 'Single Tear' on to some pink and green paper (from my own stash) and added it to the piece, as well as some Dymo wording and a few more rub ons (own stash again). The numbers/wording are coloured using Picked Raspberry Distress Paint. 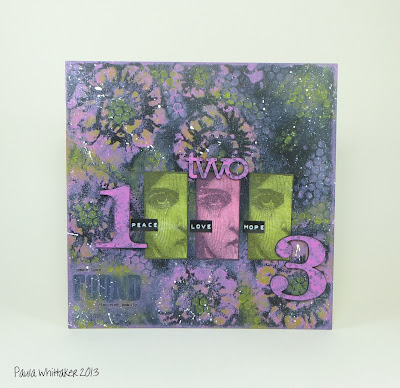 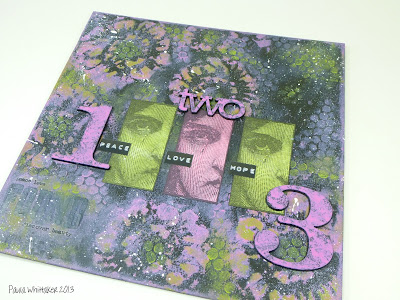 Posted by Paula Whittaker at 00:30

I love them both! If you hadn't mentioned the black gesso, I never would've known to was the same piece. I really like your blog, so I'm your newest follower! :)

All I'll say it I absolutely love part 2!! Lol...
Those stamped images are what did it for me, stunning yet mysterious face. Great use of numbers & the stencil/mask work pops in all the right places :))

I think you are too self critical because to my eyes part one looked pretty amazing already. Having said that, part two, I will say, is even better! I love the haunting face of that lady, it is amazing and i love how it all came together, including the bit coming through from take 1!!

I love them both Paula, but number two has the edge with the colours and image, I agree with Astrid, it's that haunting face that lures you in.
Hope you are having a good weekend.
hugs {brenda} x0x

I must admit I like part one better, lol! But I do love the smudging effect with the flowers on the second one.

I love the urban chic of the first one. it has a graffiti edge to it. and the second is more moody and mysterious. both very good in my opinion.... :D

I rather like the first one - makes a great backdrop to the photos. But the second and totally different treatment is lovely too.

I love the first one

Like both of them but I do prefer the second one because of the colours. Elizabeth x

Both of them are fab Paula. Part 2 has the edge.

oooh loving the second one, its fab Paula, Annette x

Paula, you can't compare these two, they are so different from each other.
I realy like them both.
Groetjes Gery

They are both fab designs but i do prefer the first one. :)

I love the background it has grunge with a hint of shabby chic feel. Thanks for kind comments, In the past I'm confidence with rubber stamping so entering competitions is scary. This year I gave it go and turned out fine and ready for the next challenge.

Actually I like both to tell you the truth but isn't that black gesso wonderful stuff if you do have a disaster - which you didn't ;)

Well I like them both too, I think the photos looked great on the first, but the face panels on Mark 2 are very striking. I love the use of that flower mask too. Elaine x

I agree with the other comments. We can all be a bit too self critical, but in the end you have to feel right about it. I think that the second part is a brilliant design and really works with the colours and images too. Love it and love your post! Kim

both is fab... the second one ist more that unique Paula ARTSY style in my mind!a really piece of art!

I liked them both though the two versions are totally different in look and feel. It is said that we are our own worst critics ... I'd say that this is true of you. However, you do have to stay to true to yourself and if the first version didn't feel right then you were right to change it. Elizabeth xx