Print and stitch - it's magic! 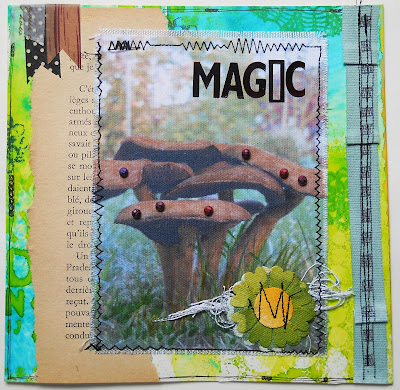 Before I say anything I just want it to be known that this blog post is in no way condoning the use of magic mushrooms, it was only after I'd finished the page and taken the photo's that it was pointed out to me that it could be taken the wrong way.....so now that's off my chest.....I'll continue :) Phew!!

I decided for this post, to come back to the sticky backed canvas by Claudine Hellmuth. It's amazing, versatile stuff and as I've said in a previous post it stands up to a lot of abuse. One of the brilliant things you can do with it is to put it through your printer. Imagine your family photo's, something you've scanned into the computer or printed text.

Here I've chosen to use a photo I've been wanting to use for ages (the offending mushrooms). I cut a piece of canvas to the size of regular photo paper and put it into the printer tray making sure it was the right way up to print on the canvas side.  For me that's upside down but I only say that because I've printed before on the wrong side so it happens. 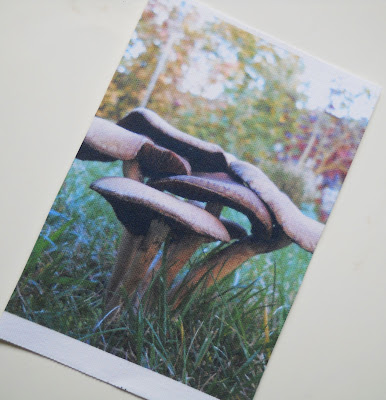 I trimmed the photo down and enhanced the colours with some Promarker pens. After layering my photo on a journal page which I'd sprayed and stencilled using Dylusions sprays and stencils, I used my sewing machine as if I was doodling with a pen.

A little tip, if you a have letter stickers which are the wrong colour for your project (I had Jenni Bowlin alpha stickers but in red) simply colour them in with a marker pen and don't forget to use up those negative spaces either if you've run out of letters. That way you get a lot more mileage out of your stickers. 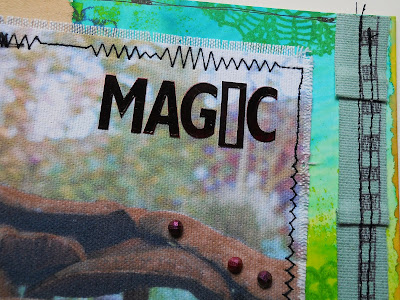 I cut a flower using a Sizzix die and sprayed it with inks.  I stuck this down too along with a few threads and stitched over the centre. 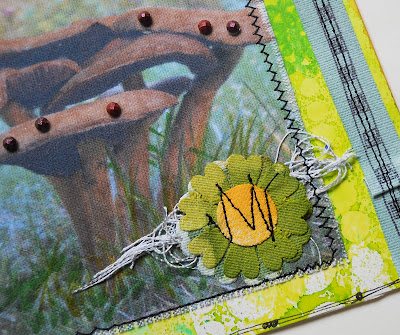 I finished the mushrooms off with some sticky gems and used up a small strip of canvas by stamping on it using a border stamp from Dylusions and sewing over that too.

loving the colour and stitching.